First off, thanks Knit Gang for the sage words of post finished object fixes. I plan to sit down with low blood pressure at some point this week and tack down that bizarre loopy thing in the back of the blue baby blanket.

Meanwhile back at the knitting ranch (or at least my chair in the corner) ...

I have been very single project focused as of late. I feel like this is a newer development in the past year or two. Still, you'll usually see me waffle between things. I normally have a pair of socks on the needles to "heal thyself" when other projects get cheeky with me.

Not now. Not today. 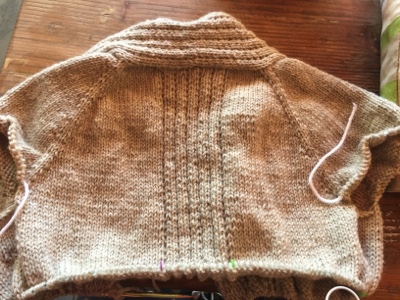 At the moment my knitting love is solomente for a cardigan. This is the one I posted about with the provisional cast on that fills me with doubt. This is the one that I kept reading the pattern only to feel @ss backwards. Well, yes I worked it out. The pattern I confirmed is well written. I basically require more time to understand patterns. My understanding is even more delayed when I decide I need to do my most intense knitting late at night before bedtime.

Then, another night, perhaps a little later than usual, I decided something was off. I went back through the pattern and decided one half (the left half ) of my neckband was wrong. I had crazy knitting dreams for 6 hours and went to work. I then came home and decided to rip out an entire column of knitting down to the provisional cast on one by one to get it right. After re-doing the first column after the slipped stitch edge, I realized ... I had initially done it right. I looked at the part of the pattern I read the night before that made me think I was wrong. I was referring to the wrong part.

It's okay. I fixed it, but I lost an entire evening of knitting undoing something that wasn't wrong. It's still too fresh to really belly laugh about it yet.

I finished the yoke and now am working the body. alas, I now see, where I undid that knit column to put in a purl column to yet undo it again and replace with a knit? It's loosey goosey and again the madness has set in. I will attempt this evening to fix it. The madness, the sadness within, it's Shakespearean. I enjoy this, right? 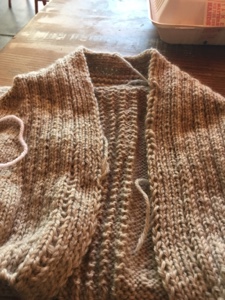 This is the goal. I picked up the kit at Craftsy just after I swore off kits on Kathy's blog when she asked, "Do you fall for knit kits?"  This was my response:


5. I have fallen for knit kits. Once or twice. I have repurposed the yarn. I doubt I'll be doing that again anytime soon!

So embarrassing. The deal was good and the pattern is pretty and I'm weak.

Have you ever had a project where the madness has taken hold? Was it a garment? Did it speak to you in a funny ghost voice? ;)
Posted by elns at 12:32 PM 15 comments:

My SIL in Arizona wanted a baby blanket for a friend of hers at church who has been having a difficult pregnancy. Much like my mother, my SIL asks for nothing and I was really touched she asked for my assistance. So together, we perused a local yarn store when I was there visiting and we admired the various hues of blue. I felt like I had a decent idea of what she was looking for and then returned home to put together a blanket idea.

I decided on Baby Chalice which I remember being an enjoyable pattern, once I got a hang of it. I also remembered that I wasn't crazy about doing it in acrylic. The drape was non existent. So I went to my LYS and went to look at the Lorna's Laces Shepard Worsted the pattern was designed with. They didn't have the colorway I was looking for so I bought other shiny things and went home and ordered online. 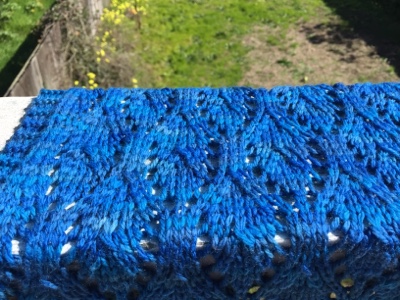 Again online I waffled between 2 colorways this brighter royal-ish one and a more muted, ocean/winter light kind of blue. 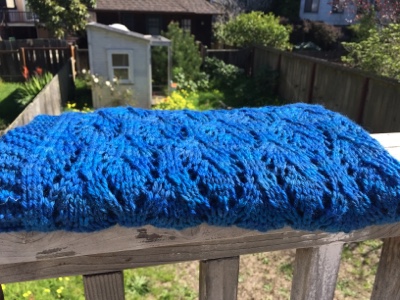 The pattern was again, enjoyable. 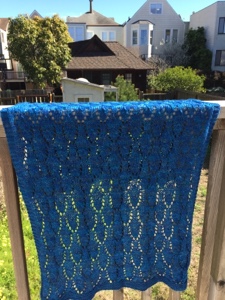 I took forever to block it. I took it out to the home of my friends when I went by for a visit and let it catch some sunshine for a final dry. Pleased with myself I folded it back up and promptly found this! 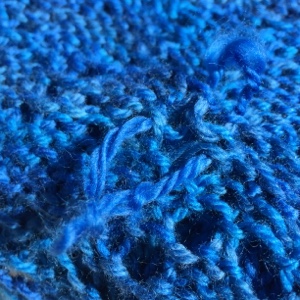 I can't seem to find a drop drop. Lace is confusing enough to me as it is. I am trying to sort of hack it together with a tapestry needle. I simply don't have the heart to frog it all. So tell me am I bonkers or what?

A post where she goes on again ... oral health and evil knitting

Thank you so much for the kind words in the last post regarding my gum surgery/procedure. I'm surprised how many of us have had work on our gums done. I actually had the bone graft and deep pocket repairing. I remember waking up saying, "Did you lasso my teeth in stitches?" and falling back asleep to wake up to myself up to the sound of my own snoring and then demanding chapstick. What a dork, right?

I have a problem with chapstick. To this day, I don't regret not getting an epidural in time, but I do regret not having any chapstick on hand during my son's birth, ha!

Anyhow, I was really okay -- the rash is still plaguing me, but I'm surprisingly not too crabby about it -- it provides a good excuse to avoid the gym this week and knit. I remember when a certain knitter had her rash and I'm definitely utilizing the love of oatmeal and hydrocortizone. Nothing like referring to the wisdom of knitters. At least it's not a heat wave!

I did my whole mouth at once partly because I have that DDS fear and also hey who wants to pay for that anesthesia twice if you don't have to? (and yeah, it wasn't just one spot, 'cause I got to complicate things ... always)

I got my stitches out today.  I'm terrified of that gum grafting you all described where they take a piece from the roof of your mouth so I asked them if I was at risk for that, but so far ... no. Also, despite the fact that I got the all clear for crunchy tacos and tortilla chips, I had ramen and karaage for lunch instead, ha! I'm so anticlimactic like that. It's like being excited to stay up late on the weekend to knit and then I pass out at 9:30 drooling to a Rosemary & Thyme episode on PBS. By the way nothing clears a room in my apartment faster than an episode of those two gardening ladies sleuthing about. I should buy the DVDs. ;)

The work has been really busy. There is an aspect of timing that is important which of course means I've got to sabotage myself and go two steps forward one step back.

I dunno, times like these I really start going down the knitting rabbit hole at home. I think especially since I am not exercising very much and I am grasping for a sense of control ... let me explain:

I am so excited to knit something new.  A garment! So I spend an hour tearing through my apartment looking for a pattern I xeroxed. I fear I recycled it in my haste to declutter, depaper and make surface space.

That's okay right? Because there are only 1.2 million patterns I've been DYING to work on, right?

SO I turn to a cardigan that looks fairly simple. Top down. OK. But whoa, hey, what's this provisional cast on thing? I don't know if you know this, but the Provisional cast on is like the She-devil of knitting to me. I get going a bit, I think okay not so bad, and then I don't know. I second guess myself. Do you do this? Well let me explain something. IF you second guess with the provisional cast on, there is only so far you can go until it's FROG CITY. oh mah gah. I sort of threw it on the ground before going to bed last night. I gave it my sternest Mom face and said, "I'll deal with you later!"

Here's the thing, I can't read patterns. They make me feel dumb.  Does this happen to you, where you read the instruction and then you say outloud a little like Rainman, "What does that mean? WHAT does that MEAN?"

And that is your insight to my garment knitting.

Maybe it's a half decaf knitting week for me.

Hang tight folks, I'll show you a snippet in the next week or so along with that blocked baby blanket.

Wishing you all successful or at least stress-free, non stupid knitting time, oh yeah, and the best of Oral health to us all!
Posted by elns at 6:13 PM 14 comments:

As my cousin would say, "The Good Stuff"

I don't think I've mentioned it here, but I had a gum surgery/procedure done just less than 2 weeks ago. I have been healing from that pretty well (in my non expert opinion) and despite being less than inspired about the lack of texture in my diet, I think I managed okay. I didn't throw up and I didn't cry.

Alas on the morning of my last day (10) of my antibiotic I got a full body rash. So that I admit has been a pain from recovering, because hello itchy patches/spots.

Anyhow I have been doing my best to focus on the good stuff. 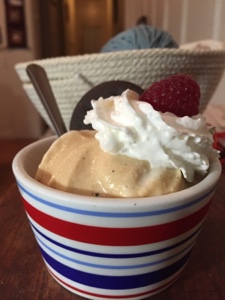 One of my son's friends (and my friend's son) made me some homemade ice cream. It's delicious. I'm also so proud to know a youngster that wanted to do something so nice for someone else without being asked. Don't worry gang, I'm keeping the circle of consideration going with a thank you note.

A walk to the park and a chance to watch the kids play tennis on a terrifyingly gorgeous February day off. 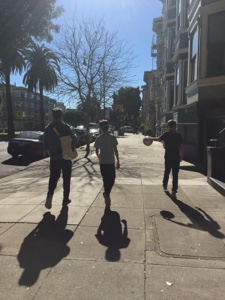 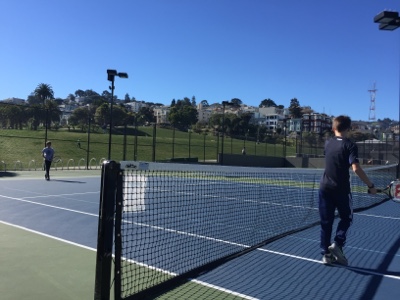 Some experimental cookie baking. I first tried to make jam stripes, but I was failing and I was impatient. So I went with sandwich cookies, using Martha' Stewart's Vanilla Cookie dough recipe. I preferred the ones with jam, but kids do like Nutella. Also considering buttercream and lemon curd in the future -- since I still have half the dough in the fridge. 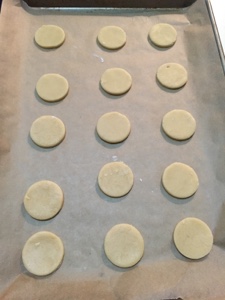 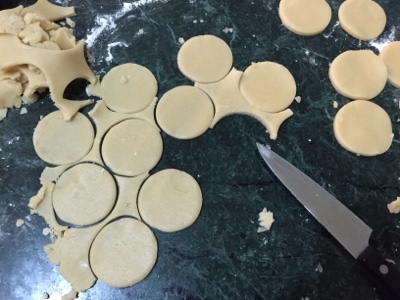 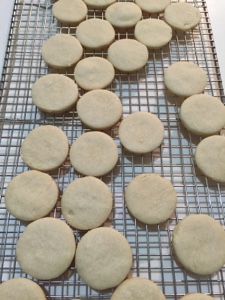 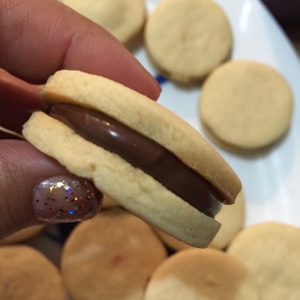 Also don't do this so late at night that you start sprinkling instant cocoa instead of sifting cocoa powder. Oh boy! Baking Shenanigans! 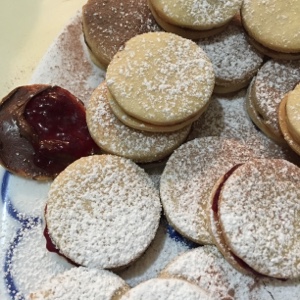 I am blocking a baby blanket and finishing another set of hats. Despite the fact I'm in a hurry I felt the need to cast on one with cables.

I have big dreams for President's Day weekend knitting!

I'm also hoping for an "Eating: All Clear" from the Periodontist this week and then look out! Crunchy tacos and tortilla chips for all my friends! I think I'm going to make a bowl of popcorn the size of my head!
Posted by elns at 5:59 PM 14 comments: