Considering I finished my 2016 Xmas socks at the end of 2017, I think I'm doing pretty well. I wore those while I knit these. ha! 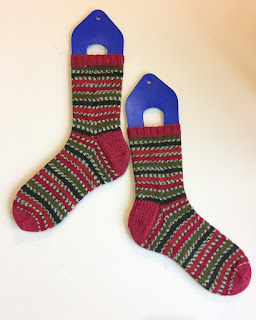 Aside from the tangle from hell, I really enjoyed knitting these socks.  I think this is the first time I have ever done a contrast cuff, heel, and toe. Can you believe that? I just never got around to it, but I saw the example on one of the West Yorkshire Spinners sites, (website? Intagram?) and was wooed. I didn't even mind weaving the ends in.

Something I'm noticing with my basic sock construction. I like a very wide toe and will decrease until there are still 16 or even 18 left on the needles. It means I need to knit on the foot a little longer than other people, but that's ok. I am here for relaxed toes and not squish squashed ones. 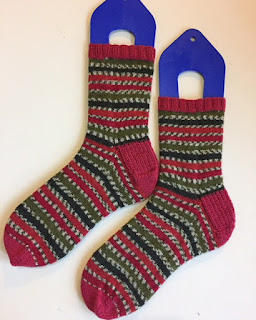 I'll tell you the truth. My love of Christmas socks is something borderline bonkers. I am obsessed with hunting down Christmassy sock yarn. I gravitate towards the red / green/ white combination, but I'm also susceptible to Gingerbread themes. I ordered some that I saw Autumngeisha knit up that just wooed me.

This means I will plan on knitting multiple pairs of Christmas socks for 2018. I will start in October. Really I will! There is a project that I'm hoarding for behind Christmas socks, I am going to eventually (maybe when I retire?) knit a sock square blanket thing that's completely Christmas sock themed. Imagine!
Posted by elns at 6:08 PM 31 comments:

Baby Gramps Cardigan made by a Grumpy Knitter 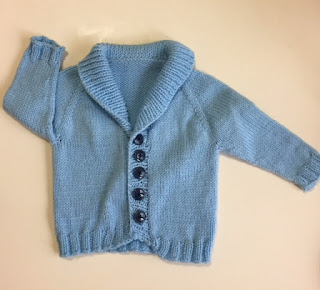 I'm embarrassed to say I started this in June when my neighbor had her son early. I thought no big deal, I'll finish it way before he can grow out of it ...

I'll be honest. I usually turn to the Baby Sophisticate for my old man cardigan. However ChrisKnits knits up a beautiful Gramps AND really likes the pattern. She found the shape better fitting for babies as well, which was well worth a try. 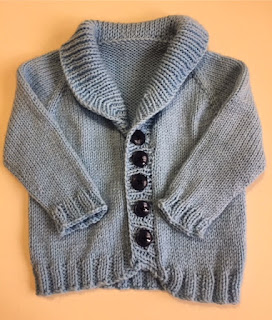 The pattern is not difficult.

So why was this so hard for me to finish?

1. My first road block came right after casting on and the set up row:

I was perplexed. Then I went to the posts for the pattern and someone else basically wrote what I was smacking the side of my head about:

I cast on the second smallest size. Row 2 tells you to knit until one stitch before marker m1, k2, m1.
There’s only 2 stitches before the first marker.

It's very hard to feel motivated when you struggle 2 rows or so after casting on.

2. The color I got really tired of this blue. I know, it's Manchester City Blue so I should be like yay!! But I'm a grumpy knitter. I do not have a reason for being tired of it other than it was stash yarn. I need to get over it, because most of the coming year is dedicated to a lot of stash knitting.

3. Halfway through the shawl I realized I hadn't done any of my ribbing with smaller needles AND, I forgot how to properly shortrow when picking up in ribbing. ugh. Thank you Googles.

4. Didn't like the buttons I originally picked out so I had to go to the ... STORE. Where I spent more money than I needed to because where there are buttons there are usually other things too, like fabric, crafts and yarn. (psst, I don't even sew!)

It all worked out.

I have another old man cardigan to knit for a 3 year old and yes, I'm going to use The Gramps pattern again, with stash yarn, but this time, it's a darker heather blue. Maybe I'll wait a few projects before I cast on. Still, feel free to wish me luck ;)
Posted by elns at 3:02 PM 25 comments:

I made two pairs of hand warmers with stash yarn:  Lion Brand's Landscape. 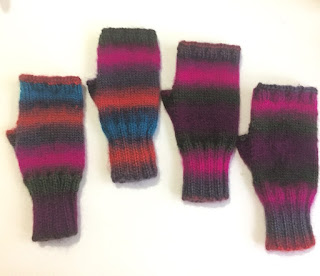 I remember loving the colorway when I was in the craft/fabric store with my sister. The colors proved themselves lovable. 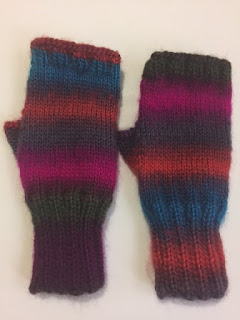 It was really fun watching these knit up. 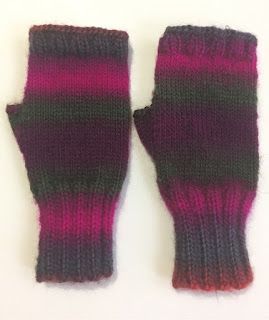 The yarn is surprisingly soft for acrylic and was not as hard on my hands as acrylic can be. I wonder if it's the roving like texture. Regardless I'm pleased with the results.

Two of my friends saw the mitts I made earlier for the holidays and expressed their like so I put them both on my list. They both will do well with this colorway.

I posted one to Spain and one in SF at lunch. I hope they provide some warmth and comfort to 2 people that have always shown me kindness and comfort.

Knex Knitting Steps (yes, I'm knitting knerd enough to put a K in front of anything)

Joy of joys. Your good wishes and Kathy B's magic chants have returned the wayward sock.

I came home yesterday and while I was doing the leftover dishes from the morning I asked my son to tidy up the living room a little. I said, "Hey, let me know if you find a knit sock. I can't find one of my Christmas socks."

He wandered off to his room, came back and said he found it with his clean laundry he put away earlier that day. (Of course, he just left it in the hamper) I gave him a big hug. Ah so many things we try to do at the same time, with our hands full. At least this is my excuse for it being in there.

So to celebrate I knit the heel flap last night :) 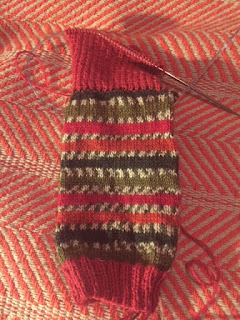 Don't worry, I haven't forgotten about my gift knits that I said I was going to work on this weekend. I have already sorted two new projects into project bags.

Keep your crafting dreams alive friends! Have a wonderful weekend.
Posted by elns at 2:47 PM 21 comments:

Okay let's just get this out of the way. Because the thought is just rolling around in my brain like a crazy train.

I have lost a sock.

Yes, remember that Christmas Sock 2017 that I knit but had gotten stuck in a tangle? Well earlier this week, I hung out with my friend Mrs. B. and her sister, Kate. Kate loosened it up with her magic hands and ... I was off knitting again. I brought the other sock with me for some reason, probably to keep my crap together.

So as I was back on track with the leg of my 2nd sock -- while taking a break from handwarmer knitting I realized I couldn't remember how many rows I knit for the leg. So, I went to dig out sock #1 to count and reconcile. Well I couldn't count.

It is no where to be found.

I asked Mrs. B. if perhaps I left it at her house. Negative.

I am hoping it turns up somewhere, but I am preparing myself I may have to play some yarn chicken and reknit it.

Something exciting happened today. My cousin in Colorado texted me that her youngest son who I knit a hat for when he was just a baby really liked the hat, but it was getting too small and would I consider making another in a larger size. 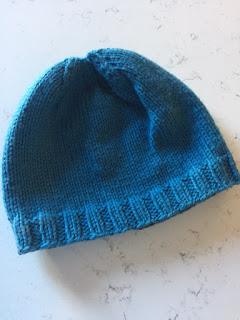 So guess what I'm working on this weekend?

I pulled a groin muscle over the weekend and have not been able to exercise properly since Sunday.

I'm resting. I'm stretching as much as I can. I'm knitting. (I have some ends to weave in, but I'll have 2 more pairs of hand warmers to share shortly). I baked a Chai Cinnamon Swirl Cake. 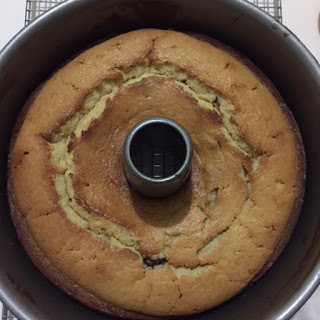 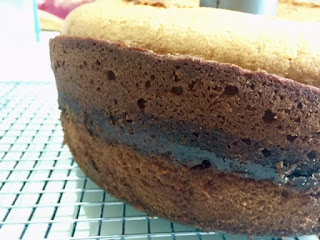 It was ok. the bake was not even enough.

I also got rid of 2 boxes of STUFF in my apartment. There is so much more to go through and get rid of but I'm pleased with any amount of unnecessary moving out.

Everyone's blogs have me all excited to knit as much as I can. Following other people's leads I am focusing on knitting from my stash in 2018:
Wishing you good thoughts.
Posted by elns at 6:10 PM 22 comments:

Friday Finish in the past and present

It really is true, there is no bigger thanks for a handknit gift than that of knowing it's used. (For baking I think it's if someone asks for seconds, for you to make it again or for the recipe!)

Here is a picture of my little friend when she was just a wee elementary school lass with her original handwarmers. These were a lovely wool, Crystal Palace yarns I believe. 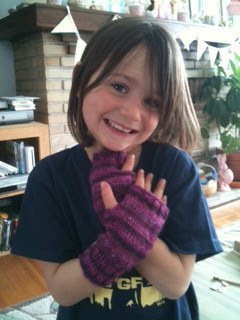 And here she is photo courtesy of her big brother who is besties with my son after she got them this morning. 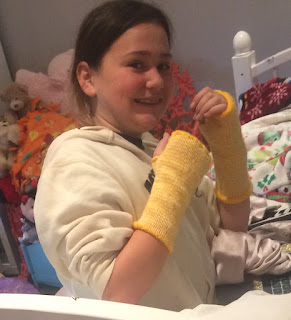 Here's to knitting some more happiness this weekend. All the best to everyone.

5 years ago, I made my friend's daughter a pair of handwarmers and apparently she's worn them out. Now in middle school she wore them over at dinner the other night, far too tiny for my little friend. 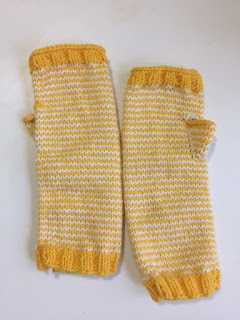 I told her I'd make her a new pair for the new year and asked her for her preferred color choices. She asked for yellow because it's a fun color and it goes so nicely with white. It's another pair in acrylic, for that middle school after school snacking and washing. Also the colors were right in front of my face at the yarn store. 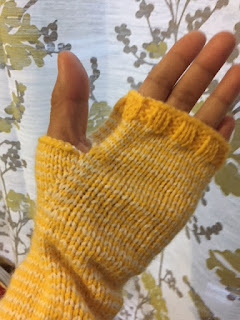 These are more of a slouchy, relaxed style. I thought I'd switch it up a bit. Hope she likes em. 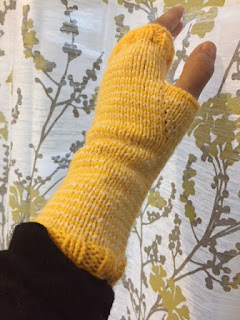 This was my third pair in the past 2 weeks and I have to say, I am completely enjoying my mass handwarmer knit.

I have another pair for another friend on the needles and plan another pair in a bulky weight yarn for my other friend's mom in time for Lunar New Year. Much like socks, the handwarmers are good projects for "to-go" knitting.

I am definitely going into 2018 feeling my knitting mojo. After my small pieces are done, I'm going back to sweaters and socks. Mainly to move the large stash set aside for specific projects. It's a crafty form of decluttering ;)

I'm enjoying everyone's crafty new year fervor in the blogosphere. I hope the New Year finds you looking forward with as much positivity as one can muster.
Posted by elns at 5:50 PM 31 comments: