I managed to drag these socks to Europe and finish them there and block em' at home. They are a gift. I hope they fit! 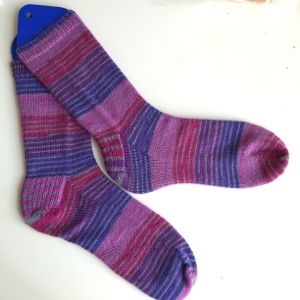 I really do love this Patons Kroy sock yarn. As discussed on Instagram, it's a total work horse yarn and it's pretty and it's squashy. 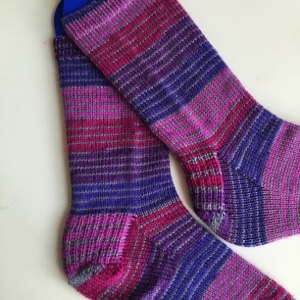 It might be a little heavier in weight than some of the other sock yarns, but I don't think that's a problem. Maybe fiddle a bit with a US 2 but this was a very satisfying knit. I was sad it took me a little longer than I intended, but that's pretty much my knitting life in a nutshell.

I tried last night. I was exhausted. Technically I was trying to fix a hole in a sock, but my eyeballs were swimming and I couldn't read the small instructions on my phone very well. I will have to do battle with that another day.
Posted by elns at 11:22 AM 16 comments:

New socks! I know I was talking all this smack about how the Banana Leaf was my one love. I lied. It was a case of summer lust and I'm easily distracted by the next knit. 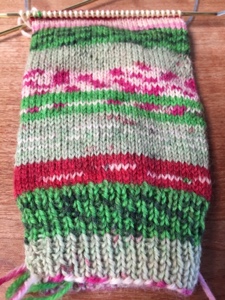 I blame all the summer sock knitters out there and Kathy B and her fabulous Christmas in Summer knit stockings.

Picking up the pieces

I have pulled my old Banana Leaf scarf out of hibernation. It's really a perfect summer knit though I have to say that summer knitting in San Francisco isn't exactly ... taxing.
The wind was whipping today. The morning was partly cloudy but I barely needed my cardigan for my lunchtime putter.
Anyhow sunshine and green. This is my dedicated knit. I started and stopped casting on socks. Stay tuned! 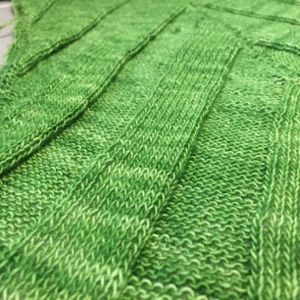 Baking is my new exercise

Yes, I know baking is nothing new for me. It's my other past time. Some people, knit, bake, spin, weave, stitch, make soap and sew (and some do them ALL --I'm looking at you Araignee!) but I seem to do alright with knitting and baking alone. ;)

So last night I took to battle with flour, and sugar and then some ... 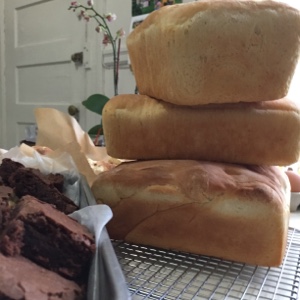 My back is much better, but not good enough for exercise, physical therapy, chiropractor or massage. I can't sit still for too long but I don't necessarily like moving a lot either, therefore baking has become my new exercise. I'm taking steroids and I need activity to keep the crazy at bay. 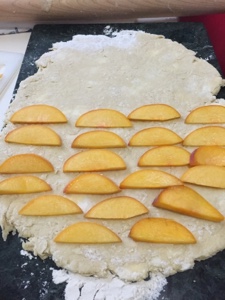 I shuffle just enough and for certain tasks can sit down and relax a little bit. These are Peach Cobbler "Scones". They are not too sweet and a good vehicle for peaches in the morning. They would be a welcome addition to any summer brunch. This was my first pass. I would do it again, but I might modify the assembly. I haven't decided yet. Conceptually I liked it and I got a lot of compliments on the flavor and bake. 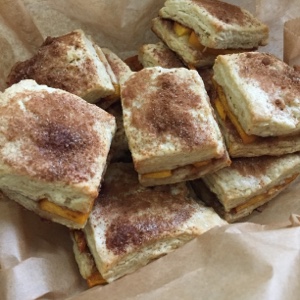 Let's talk about bread. Bread is kind of like lace for me. I love the idea of it but I'm kind of overwhelmed by it and at times feel like it's just a challenge from the universe. Such a challenge that I decided to try 2 recipes at the same time. This wouldn't be so much of an issue except that both recipes yield 2 loaves and I only have 2 loaf pans... so I used a brownie pan. What? It's bread, it baked ... 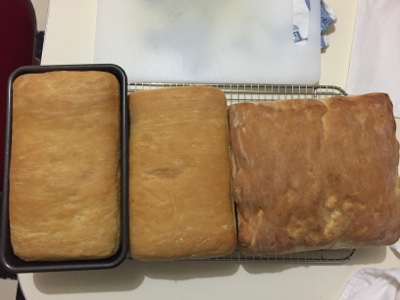 It's really about yeast. I look for big foaming action and usually don't get it if I'm either not using instant yeast. I think I don't manage the water temperature well enough. However mixing in the sugar as a catalyst and then sprinkling the yeast on top also helped. 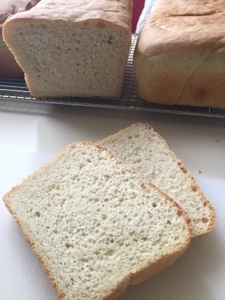 Yesterday was day 2 of  attempting to make sandwich bread. I finished roughly at 12:30 am with this lot. Now there will be a lot tea sandwiches I suppose and nutella and Lady H made delicious plum jam ... so it won't go to waste. (Apparently you can freeze bread as well)

The household has been keeping up with The Great British Bake-off on PBS and so there is a lot of sassy talk about how my "bake" or "crumb" is. There are general inquiries on the my color of my crust and they like to knock on my loaves of bread.

It was HM's birthday at work and she keeps my sanity in check everyday over there. Some newbies have come on board with their own flavor of friendship and baking skills so we decided to have a bit of a baking buffet for the office to celebrate. So ... I sort of, got busy.

Wednesday I should have a knitting post. I've just been trying to get some decent pictures for you. But my needles are definitely clickety clacking ...

Thanks for your patience as I sort out my life and health. It's sciatica probably exacerbated by my scoliosis and youthful desire to skimp on before stretching. (I'm ok with after part, kinda...)
This is a first for me and I'm trying hard to follow Dr. instructions and take the medications prescribed. I did request no painkillers like Vicodin -- opting for the old ibuprofen ...good to have somewhere to escalate to if needed is my philosophy I suppose. I'm not going to lie I was shocked by the amount of pain I am in but also really in awe of true patients of pain if you know what I'm saying. For those of you with chronic issues my heart is with you even more.
Anyways on to some highlights. These are some abbreviated photos based on a phone back up and the help of my lovely family.
My parents lovely town during our evening walks 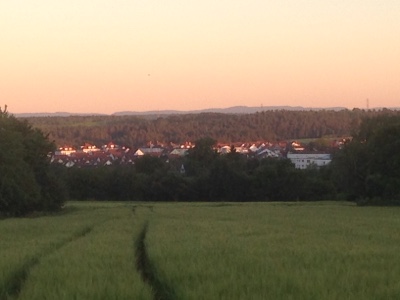 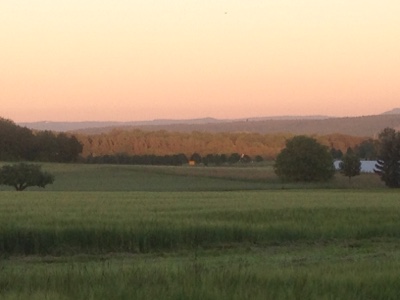 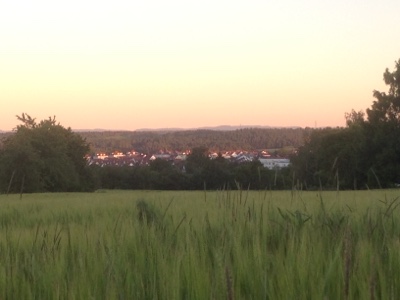 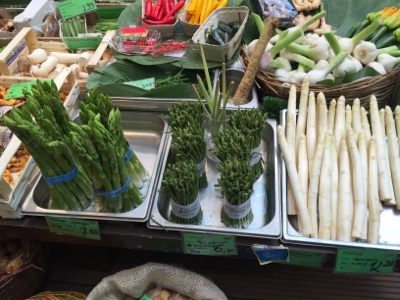 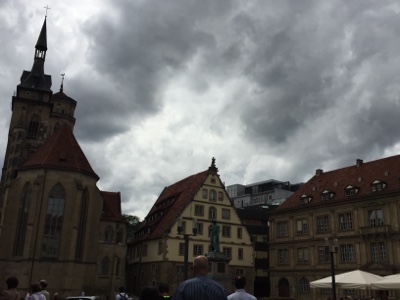 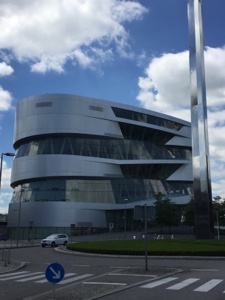 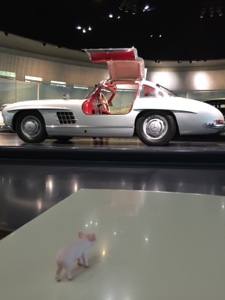 I'll dig up some more photos soon.
Thank you for your kind comments and visiting. You're appreciated. I'm grateful.
Posted by elns at 6:56 PM 16 comments:

A momentary pain in posting ...

At least that's what I'm hoping it will be. I screwed up my back kids and am having crazy muscle spasms and pain.
I can't even knit.
I'm putting my big girl pants on and going to the Dr. this afternoon.
I promise to get it together after.
Meanwhile I hope you are crafting and laughing your way through the summer. Any good summer cooking going on? Family activities that are making you all enjoy spending time together?
While with my Mom this summer we rediscovered the joy of Gin and Gin Rummy. My friend Ms. Annie B had me rediscover the joy of a crispy refreshing Gin & Tonic at the end of last summer. But right now I'm all about iced black tea and strawberry lemonade. Grown up never? Maybe the classic white wine.
What about you?
Posted by elns at 9:40 AM 12 comments:

A sporting loss and a sporty win.

Our family missed Game 7 of the NBA finals where our dear Golden State Warriors battled it out with the Cavaliers.

We missed it because we were en route to visit my parents in Europe.

Alas the Warriors did not win. The sad sounds when the pilot announced it before we landed is a testament to our motto: Strength in Numbers.

I did finish my Post Season socks though and even brought them with me for comfort and support.


I have meant to post sooner, but while taking a trip out to Strasbourg my iPhone was stolen and well ... there went my photos and my easy connectivity to the world.

The trip was filled with good times and fun things which I hope to tell you about a bit very soon. There are some more socks too ;)

I'll be making the rounds soon to see what you've all been up to. I hope your summers have been filled with good times.