Friday was a retirement party for my Step Mother. She's the best Stepmother. Friends and family came out to celebrate her. I left work early to make sure I got there in time. (Commuter trains on a Friday in the Bay Area are kinda crowded)

I was whining at the next level to my husband who picked me up from the BART station that I used a commuter train and had no commuter knitting.

I was "repacking" my bag and I think instead of putting my mini knitting bag in, I reached for a cardigan because all knuckle heads carry 2 cardigans for fun.

Being the bleeding heart that he is (which speaks to why my son favors him) he drove me to a A Verb For Keeping Warm and let me impulse shop. What a guy. 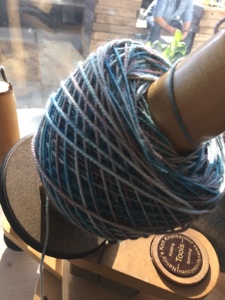 It's a treat to go there. Even though the husband works out there, I don't cross the bay that often if it isn't to see family. I stay out of his way at his work on Saturdays. It's horribly busy. 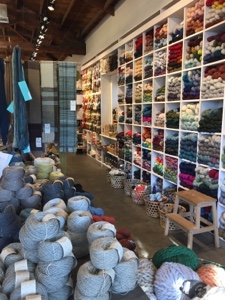 It's a pretty store. Everyone is very nice and super helpful whether you know exactly what you want or you're just beginning a craft. 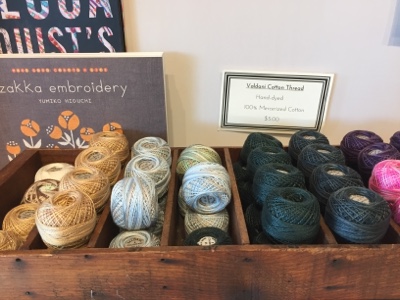 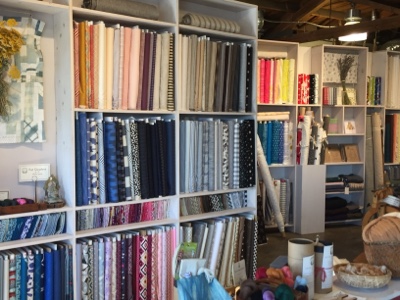 They have super cute and fancy embroidery threads & pretty modern fabrics on one side of the room and yarn of course on the other side. Right now, I do not allow myself to purchase anything but sock yarn for stash. Everything else must be for a project that I will knit immediately. No waiting, no hoping, no taking up space, no dream changers. There is not space for that. (This tone is mainly for myself not for you people w/o the space and clutter problems I have created.)

Other weekend highlights:
Amazing Food Allergy - I had these weird congested feelings both coughing and my sinuses just totally stuffed up. Weird heartburn like sensation, but it couldn't be food poisoning because no one else was ill. Then my hands started itching. WEIRD. So I took a Benedryl, I think that helped a bit until there was some vomiting involved in the middle of the night. What the heck was that? I didn't eat anything "new". Something must've been mixed in a spice or something that I'm not familiar with or ... it was the dreaded later in life allergy development. Please no. Please no.

School picnic on Saturday. Yeah love recovering from a food allergy incident and then going to mingle at a Potluck. It was initially intimidating, but you know, you fake it like it's all good, and by the time I left I was actually feeling more human which is good because we had reservations later that night at this fancy Chinese Restaurant that's getting all these accolades as my gift to my husband for his birthday. It was delicious, I felt great.

Sunday I swam outside in the real life sunshine. It was magical. I'm instantly transferred back to my youth. I messed around in the kitchen working on a ravioli recipe modifying some ricotta filling I use in a lasagna. Ricotta, frozen spinach, an egg yolk, fresh basil, prosciutto, salt and pepper food processed and then slapped into the thinnest won ton wrappers. I did a huge batch. Tonight is the unveiling. Fingers crossed. Off the top of my head, I think I would add some parmesean to the mix. Meh. Worth a shot as is right guys?

A little bit of this and that.

My moments of nothing are reduced to a few hours in the evening these days. It's not a bad life by any means, but the knitting is just a round or two when I can spare it. I had a moment on Monday. Always need a pair of socks going, easy to throw in a bag and knit a round when you find yourself with the unexpected moment. These are Skyp socks in Felici. A squishy knit. Not my best work but I'm ok with that. 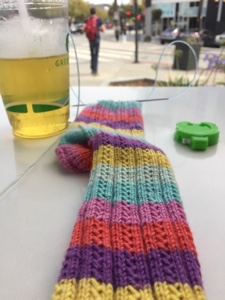 Please don't ask about the baby sweater ... I'm derailed momentarily. I want to slap my forehead just thinking about it. 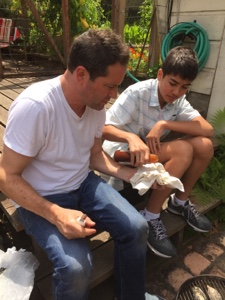 We are finding that even on our days off doing something fun, like celebrating my husband's birthday on Sunday out at his mother's we are bringing laundry with us, because we are so behind. His brother teased us, "still the college kids." But hey we live in a 6 unit with 1 washer and 1 dryer. We take the opportunities. 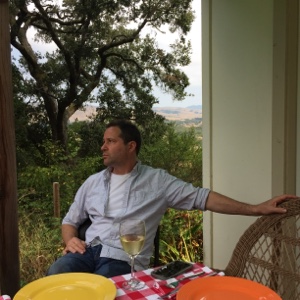 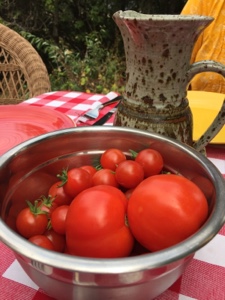 Monday was also the first day of High School for The Kid. He is sooo too cool for me and my "recommendations". 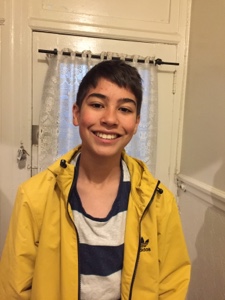 We went and bought him new running shoes and new cleats since we didn't have time before school started. I found out I've had my poor son in shoes a 1 1/2 sizes too small this summer. I'm a horrible mother, I really am.

Life continues with a lot if this and that this first week of school. His soccer practice on Thursdays doesn't get out until 8pm ...

We aren't nailing it, but I think we're ok. We're still getting it done, still laughing and at least we're tired enough to sleep, ha!

August is upon us and I feel like I was just getting settled into summer.

Since I last posted I sort of barreled through June at work, trying to prep for holiday with my family. My sister, her son, my husband and my son all flew out to Germany together in July to see my parents in Germany. 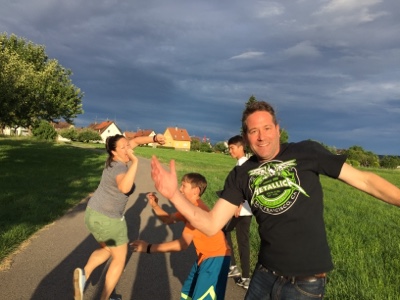 My husband stayed a week, my sister and I stayed 2 and then our sons stayed 10 more days and my Mom flew back out to the states with the boys last night. 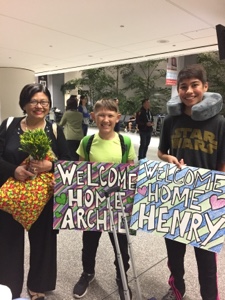 My sister and her family drove down with my Dad and Stepmother to San Diego for my other nephew's graduation from Boot Camp. My mother is flying down to join them. After meeting her bestie out in Las Vegas, Mom will return to spend a few days with each of her daughters before she returns to the Colonel who is working away and already missing her.

I packed way more knitting than I actually got done. (Isn't this always the case) And my mother had a gift for me ... GIANT knitting. 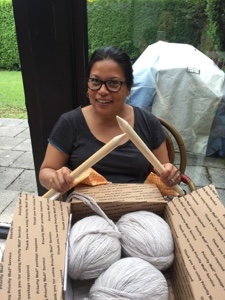 I have some loose ends I'm finishing up in the knitting world before I tackle that! LOL. We will see how this turns out.

This trip to Germany was really relaxing and family oriented. We had our usual walks in the evening and even added some morning walks in the woods when there was time.

We would go bowling on base or play German miniature golf (open 5-8) in the valley. So pretty, there were ponies and sheep just around the corner. We always saw a neighborhood crew of men were never playing but sitting out in the sunshine having a lazy drink and a long chat. 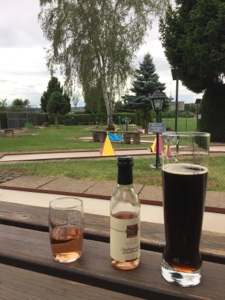 When we were out and about in the evenings we played Catwatch Germany 2017, where we would be on the look out for cats and take a picture of it. We are going to assemble a page dedicated to Catwatch in our photo album hehe.

As usual our parents wanted to take us out to dinner where we had some delicious things, but it was really nice to also BBQ at home. The kids would play badminton or hang out and chat with us. I got to take over the grill. hehe. 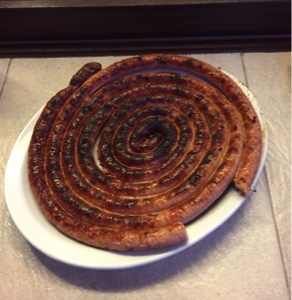 On a whim during the first week my mother decided we should take a "day trip" to Paris on the TGV. After she secured seats my husband and I found a really lovely AirBnB in the Marais that could sleep all of us. It was really family friendly especially for one evening and had a nice living space that we could all hang out in when my Uncles dropped by in the evening. 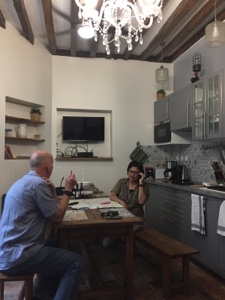 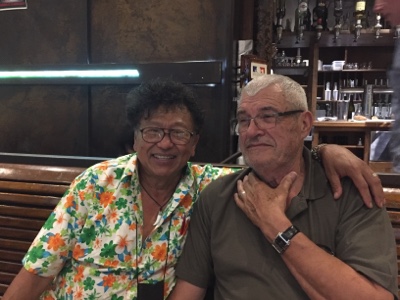 It was a whirlwind, but it was lovely to show the boys Paris at night and run out way past bedtime and walk to get them a crepe and some ice cream. Ahhh Paris. 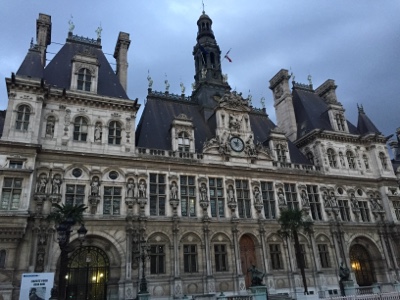 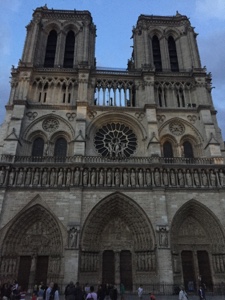 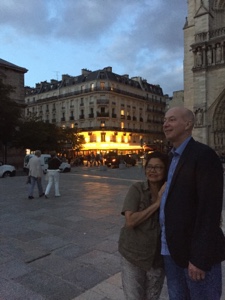 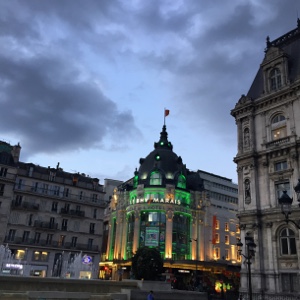 We also took a day trip to Heidelberg which was a lovely University town complete with castle ruins and a river. 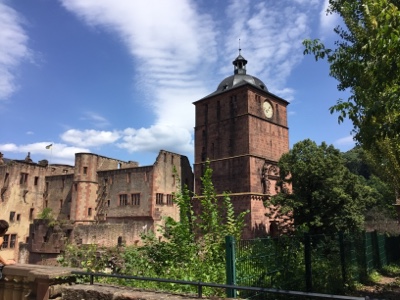 It was a great trip.

I would be lying to you if I said I wasn't already daydreaming about when and where I'm going to knit my next pair of vacation socks -- technically start them, ha!